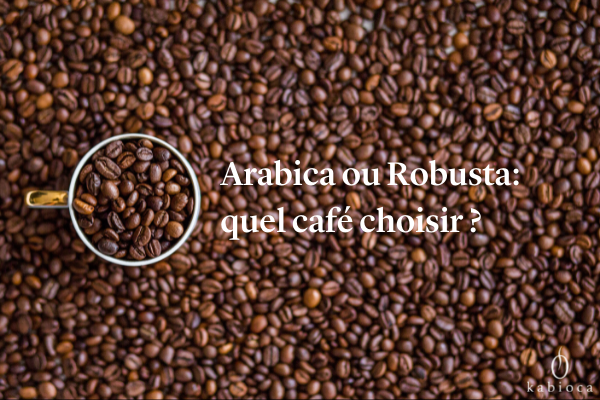 Both from Africa, Arabica and Robusta are also the most popular and widely grown coffees in the world. But what are the differences between Arabica and Robusta? Which is the best coffee? Kabioca reveals in detail the origins and flavours of these two coffee varieties.

The difference between Arabica and Robusta

Although they share the same origins and both types of coffee come from Africa, Arabica coffee originates from the Ethiopian highlands, whereas Robusta coffee grows in the Congolese forest, in the Ivory Coast and also in Uganda. Vietnam is also now the largest exporter of Robusta. This coffee comes from the world’s most common coffee plant, which, as its name suggests, originated in the Arabian Peninsula. It is in fact in Yemen that the first coffee is said to have come into existence and that Arabica was first consumed and tasted. Today there are nearly 200 types of Arabica coffee, divided into different varieties such as Maragogype or Moka, which in turn are divided into several types such as Djimmah, Sidamo or Harrar…

Le The Arabica coffee tree, native to Yemen, is a tenuous tree growing gently on the high plateaus, between 800 and 2000 metres altitude on mineral rich soils (essential elements for its remarkable aromas). Arabica coffee likes mild, humid, shady climates and is not suited to harsh climates. It definitely prefers mild temperatures, between 15 and 24 °C. The cultivation of these coffee plants requires a lot of humidity and shady areas. This is why large trees are often found in the middle of Arabica plantations to protect them from the heat and sun, while maintaining a good level of humidity.

More fragile than Robusta, the Arabica tree produces coffee beans with a low caffeine content (between 1.2 and 1.5%). Its oval and elongated beans, red, purple or yellow in colour, offer fine, varied and pronounced aromas. Thus, less full-bodied than Robusta, Arabica coffee provides a great deal of finesse in the mouth and more developed aromas that suit a majority of coffee lovers. It represents 2/3 of the world’s coffee production ! Arabica or Robusta, which one should I choose ?

Each type of coffee has its own aromas and character. Their flavours vary according to the climate, the soil, the altitude, the way the beans have been dried and the way they have been roasted by the roaster. So there really are differences between these two types of coffee and it is very difficult to know which is the best. It all depends on your palate and your taste. It is not necessary to make a choice, as these two types of coffee complement each other perfectly. It is not uncommon to drink a mixture of Arabica and Robusta. Our Intenso coffee, for example, is made up of 80% Arabica, to which 20% Robusta is added, to give it that special character: a fruity, flowery flavour, coupled with a lush acidity.

While the French tend to prefer Arabica for its aroma and finesse, the Italians prefer the power and intensity of a good espresso made with Robusta.

Now that you know the difference between Arabica and Robusta, you should know that it is above all a matter of taste, but the main objective remains to please you!

Discover our entire range of Robusta and Arabica coffees.

Recent Posts
Legal notices | Privacy policy
© 2022 KABIOCA. All prices are in EUR. Order confirmation in EUR (incl. VAT). Design KR.
* For delivery in France and Corsica. For other destinations, see our delivery conditions
Back To Top